Garden in the Drought

July (with one day left to go) has been rough on the garden. In Manhattan, KS, the temperature has exceeded 100 F on 19 days and reached or exceeded 105 on 9 days. It has rained just under an inch at the airport and under half an inch at our home.

Even my buffalograss is going brown (Liatris aspera in foreground).

Still, there are some victories….

Mid-March flowering had no negative consequences this year. I’m going to have ton of peaches very soon. 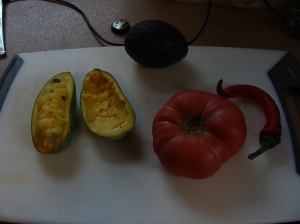 Three out of four ingredients in the guacamole I made tonight (except the most important one) were from the garden. The pawpaw was a delicious addition, and rather unusual for July.

One of my favorite native shrubs, Amorpha fruticosa, has been impervious to the heat, and the Allium cernuum and Sporobolus heterolepis below are still doing quite well.