Posted on December 8, 2016 by prairiebotanist

Axial tilt is getting to me, so I thought I’d look back on some more manic times in our native landscape from earlier this year. Our garden was in its third growing season and its flora was closing in on 300 species native to grasslands and woodlands east of the Continental Divide by late in the season. We have dramatically reduced our lawn (still 900 square feet to be killed next year), and many of the areas planted in 2014 and 2015 had filled in nicely, reducing work and bolstering the time to piddle around making small adjustments and enjoying the flowers, birds, insects, frogs, and the occasional snake or salamander. I take pride in the garden, but I have to admit that most of it is built out of grief and anxiety. Invasive species march across our best natural areas while resources for management are slashed and Revolution-era bur oaks are making way for four lanes of traffic, but I can get home after work and “sedge” another fifty square feet of lawn, so I do.

I started the below strip of prairie along the driveway during the summer of 2014. I killed the lawn with glyphosate in May. I had to follow up and dig out quack grass, which sent up new shoots from its rhizomes between two and three months after the herbicide treatment. I got it all. It took systematic hard work, but at least I was helped by sandy soil. Now I will never have to mow or spray this area again.

I planted a matrix of prairie dropseed, little bluestem, and side-oats grama with some native sedges (Carex hystericina and Carex vulpinoidea) in the foreground where there is a slight depression that receives runoff from the road and my driveway. Together these graminoids serve as a living mulch and support what would otherwise be the lanky stems of numerous prairie wildflowers. It also facilitates burning the area off in late fall or early spring, which I am lucky to be able to do with little protest from neighbors or local government. I started most of the plants seen here from seed, particularly the grasses. I simply raked some seed into a set-aside area of the vegetable garden, which generated many hundreds of seedlings for transplant and saved a lot of money. I ordered several dozen plugs (e.g. the pale purple coneflower) and a few larger plants (e.g. New Jersey tea). This strip is now about 700 square feet in size, and it cost me less than $200 in seeds and plants. It did take about a year of dedicated weeding to get it to this mature and sustainable state. The same is true for other similar areas shown further below.

I am doing likewise on the other side of the driveway, but I’ve got a good deal more lawn there yet to kill.

Lawn that won’t be there for much longer, late summer, 2016

This meadow blazingstar is blooming in its first year from seed, which I simply sowed in this location after thoroughly eradicating the lawn and weeds. If you want to live in a monarch tempest during the monarch migration, grow this plant.

More of what was lawn just a couple years ago 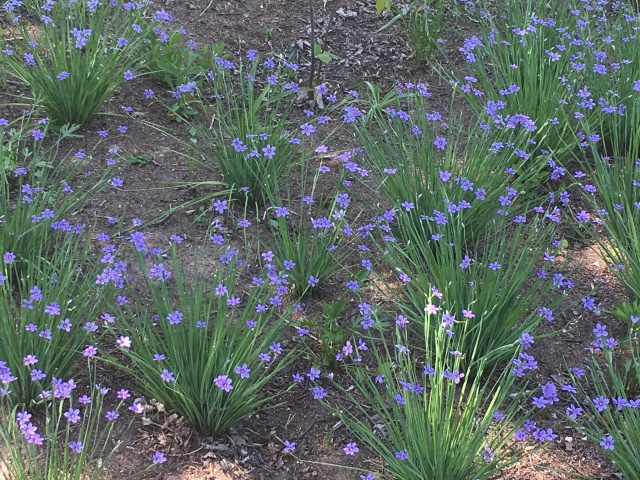 Blue-eyed mania! I’ve got some prairie violets in there too, and I’ve added some kittentails seed from Prairie Moon, so we’ll see.

All of the blue-eyed grasses and Robin’s plantain are easy to scale up quickly as groundcovers. If you order three or four bare-root blue-eyed grass plants for spring; you will be able to divide them into about twenty plants by fall. One division of Robin’s plantain can cover about four square feet of soil in one growing season (and yield dozens of divisions in fall). 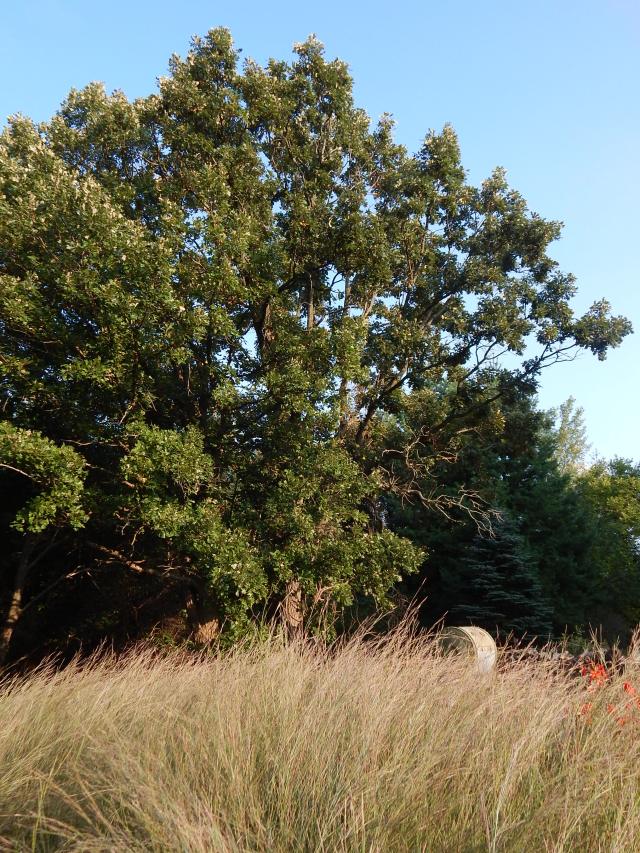 Position native grasses (here, little bluestem) in  front of oaks for great effect in late summer. This is the view out of picture window in our living room.

I dug slight depressions near my downspouts and planted wetland sedges in them. I can see four species in this jumble (Carex typhina, Carex hystericina, Carex lupulina, and Carex vulpinoidea). 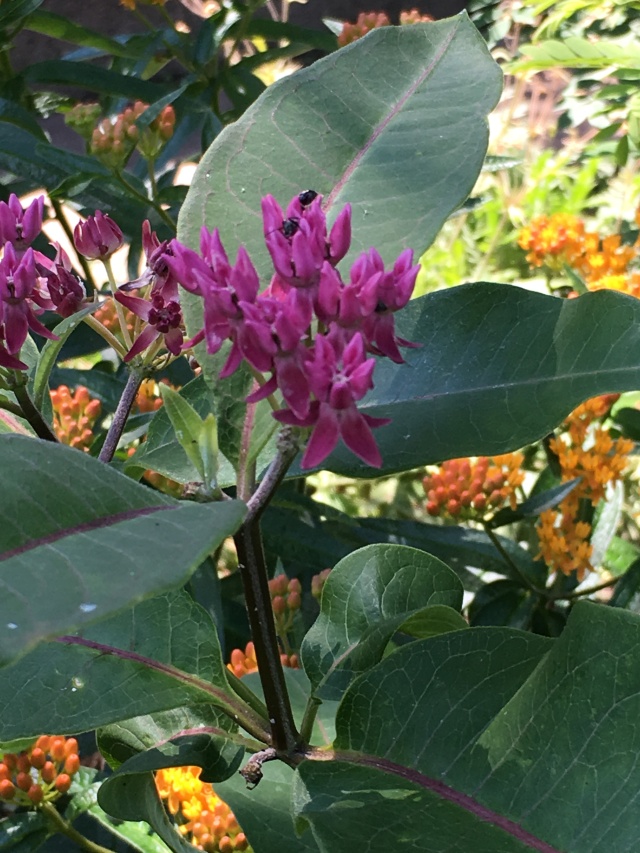 Purple milkweed is easy to grow from seed, but it is rarely offered and quickly sells out. Buy it, if you ever see it for sale. I have seen offered by Everwilde, Prairie Moon, and Missouri Wildflower Nursery. It bloomed for me in its second year.

Missouri pincushion cactus grows from the prairies of Canada south through Texas. It is easy to grow in a dry prairie garden and attracts a lot of solitary bees. Here it’s growing with ground plum, a native legume of dry prairies that is very rare in Wisconsin but more common further west. The pods are edible and taste like snap peas.

Flax-leaved aster and some other cold-tolerant cacti of the Great Plains.

An area I “sedged” late in 2015 primarily with Sprengel’s sedge, Pennsylvania sedge, and James’ sedge. The tall vegetation n the back left is mostly short’s aster. In the front right is a patch of forked aster from Prairie Moon. Sedges are also very amenable to division. I started with a few clumps in early 2014, but I’ve been able to divide them and generate new plants like crazy. This area is also starting to develop a nice cover of moss between the sedges. 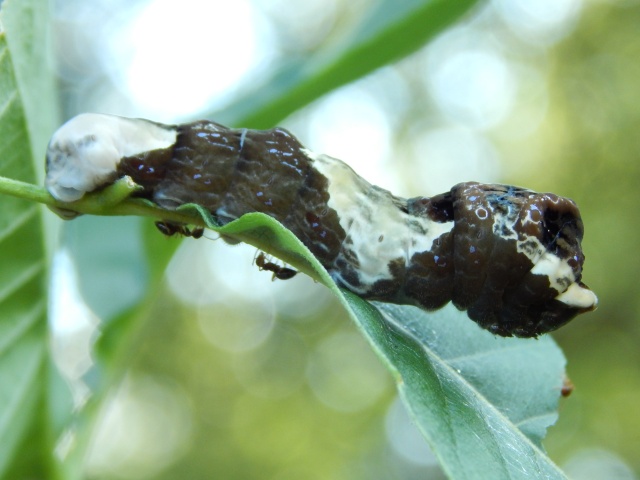 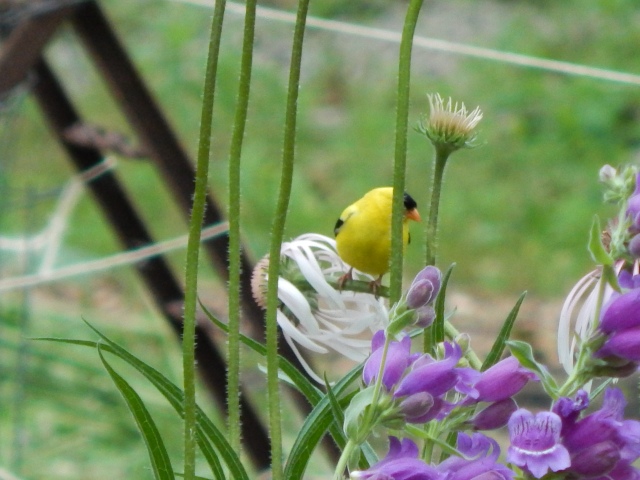 I’m too slow to get good photos of the birds. We have flocks of gold finches. 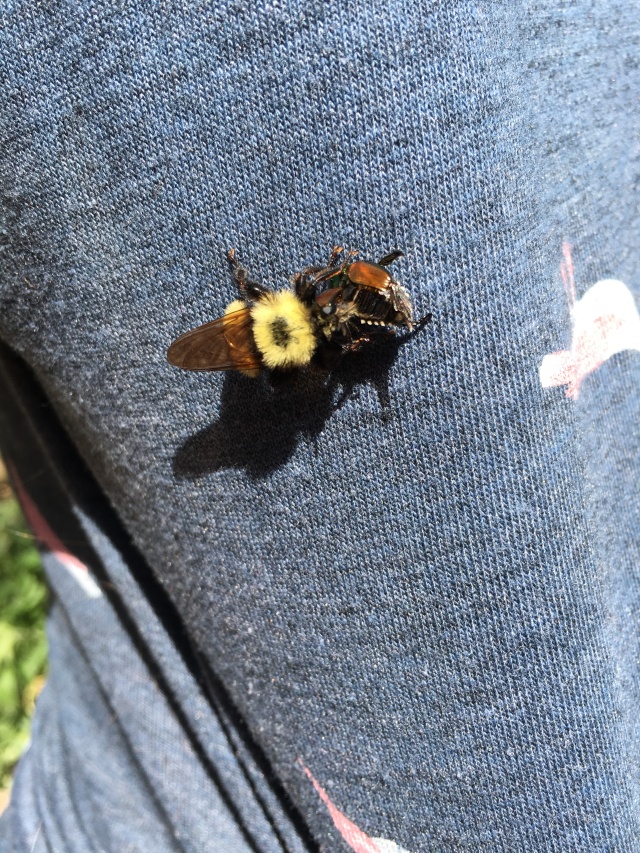 Unfortunately, we have Japanese beetles. Awesomely, we have bumble bee-mimic robber flies that kill and devour them!

In late fall, I burn off a good portion of the leaf litter under our oaks. Low intensity fires were common in pre-European Midwestern oak savannas. I do it, because it greatly reduces some of the winter annual weeds that I happen to have, and I like to burn things. I don’t burn everything, however, in order do ensure there is refuge for critters that overwinter under the leaf litter.

Sigh…back to December. Pasque flowers are 16 weeks away.